...you have a project plan for the completion of your space marine army. 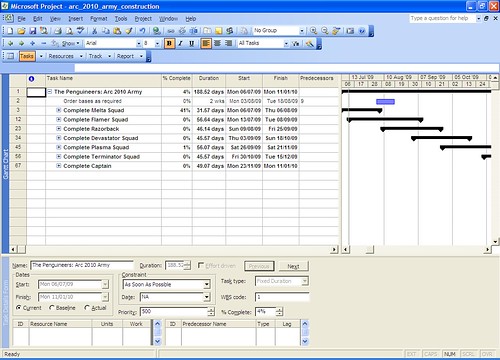 Yes, Randall has needled me into getting serious about (finally?) completing a challenge. When we played 40k a few weeks ago Randall said he was already planning his "alternate army" for "just in case" I didn't finish the army that we're working on as a group project. Pfft.

In any case, the plan I've put together has me putting the final touches to the Captain on January 11th--a whole two weeks before Arcanacon. Good lord, what will I do with all that spare time in January.

In any case, I've already started on the first squad, so let's have a meet & greet.

So here's the whole squad (so far): 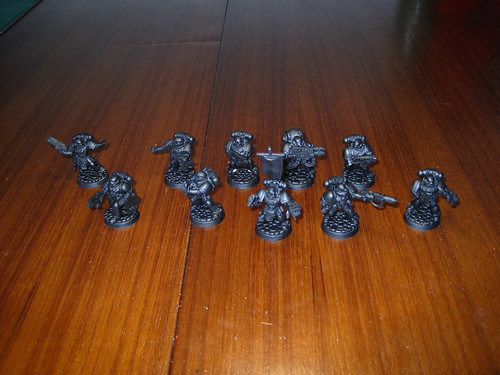 By the plan, I'm meant to finish this squad by August 6th, which isn't that far away, and is only four days before my daughter is due to be born. Could be an interesting next few weeks--especially since we should also be moving house within the next 2-3 weeks!

And, for anyone following along at home, I'm currently more than a day ahead of schedule. ; )

I finished the test model a while ago, it came together reasonably well: 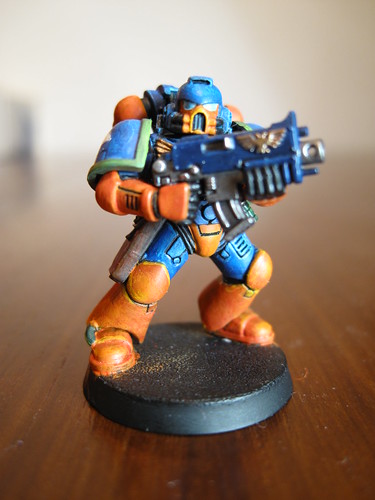 The next step is to build the first squad: a veteran sergeant leading a squad of ten, including a multimelta and a meltagun. I started doing that back in February some time, but haven't sat down for some serious time with the glue since then. So here's what I've done today: 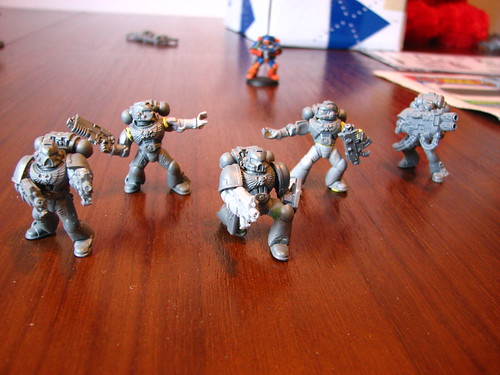 The multimelta is fairly standard, although I used the bits from the Devastator kit: 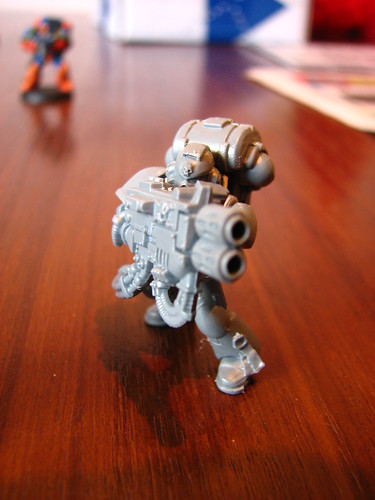 The annoying part, though, is that the power cables from the backpack force you to position the multimelta itself pointing upwards--right across the marine's face. He can't see over his own weapon!

Marines in the new(ish) codex come standard armed with a bolt gun and a bolt pistol. So I'm arming every model in the army with precisely that--everyone will have a bolt pistol in a holster or elsewhere. In this model's case, it's in his hand: 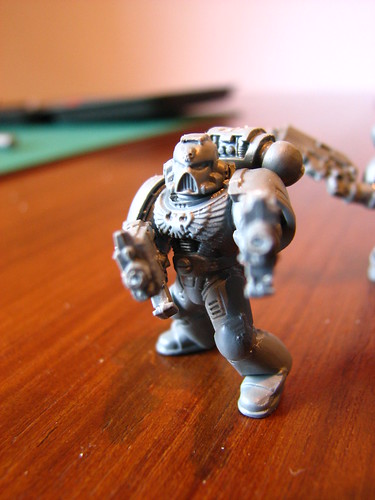 My original concept for this squad was to have five marines kneeling down with shields, to form a shield wall as the front rank. So I got a pair of legs and I cut them at the ankles, knees and hips to make a pair of kneeling legs. There's a pair of kneeling legs in the Devastator kit, which would have been much easier, but they're braced on the left leg--the left knee and shin is on the ground with the right knee in the air. Try firing a gun with the recoil of a bolter from that position, and when you've picked yourself up off the ground and dusted yourself off let me know what's wrong with it. So I had to get the legs going the other way. Around three days later, I finally had it all together, pinned all the way through. Green stuff covered the gaps and I had my kneeling pair of legs. Great! Then I tried putting the rest of it together, and you know what? It just didn't work. Plus, I had better ideas for ways I could convert and pose the other models in the squad than a shield wall. But I still had this shield that I'd put together, so I stuck it together anyway. But I dropped the shield to the side and levelled the bolter out a little, like so: 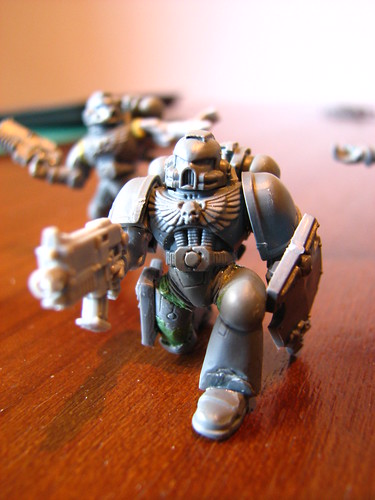 What am I going to say about the shield to my opponents at Arcanacon? No idea... Maybe I should just cover the guy in grenades and say he has his own protection. : s

The last two in the squad are meant to be part of a mini-diorama: the general idea is that the marine on the left has run out of ammo (you can see the mag is missing from his boltgun) so he's waiting for his friend on the right to throw him a spare:

Here are some closeups: 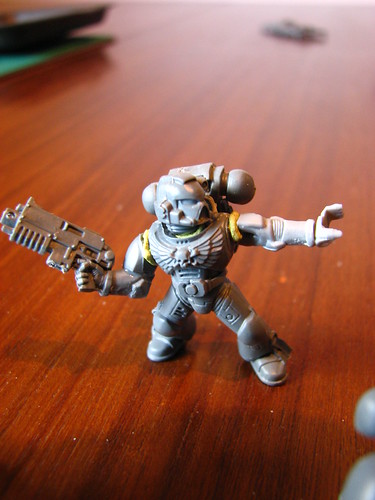 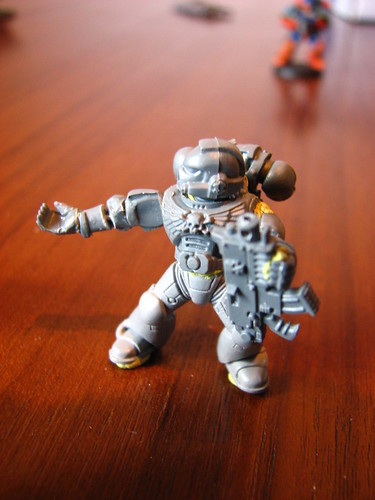 As you can see, these two are just blu-tacked together at this point, as I'm not 100% sure about the precise poses. For the thrower, I had little choice but to pin and glue the arm together as there was no other way I was going to get it to sit down, even as a test of the pose. Plus, since there's no such thing as a space marine's right hand that isn't clenched in a fist, I had to take a left hand and cut the thumb off and put it on the other side, then transfer it to a right arm. Seemed to work okay as a right hand, but I'm not 100% sure about the thrower's pose.

Lastly for tonight, I've started putting together the meltagun marine as well. The general idea is that this is the "new guy" in the squad. I've given him Mk VIII armour, mainly as a bit of an in-joke amongst his squad mates; a sort of "here, you're new, take this really short-range but highly dangerous weapon that will make you a big target--and by the way you'd better wear the new armour for all that extra protection, because you're going to need it."

The only problem is that I'm finding it difficult to find a decent head for him. There are three options below: 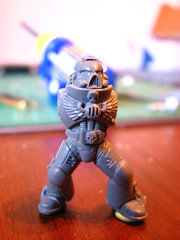 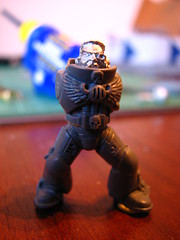 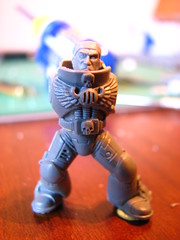 Open to: All, detailed results viewable to: All. Participants: 0

Which head do you think works best?

Well, another part of the test marine done--the packpack. Another part I frequently ignore at the end of painting. Now it's done. 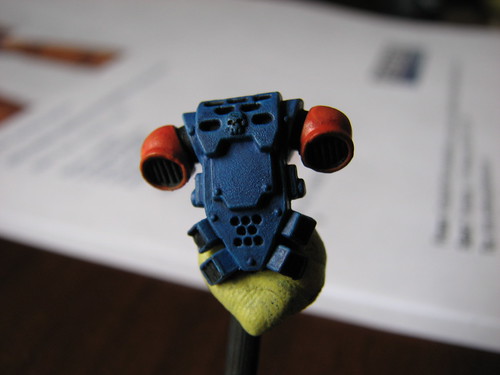 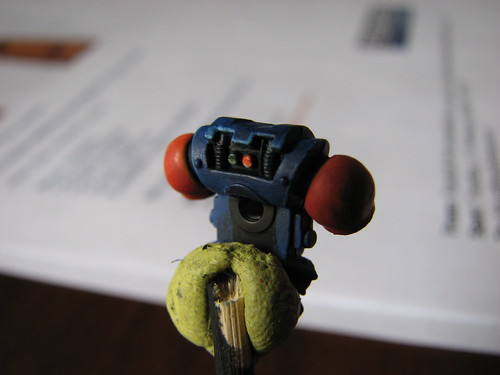 I'll work out what colour to paint the skull later. : )
Collapse